It’s no secret that positive dad examples in advertising are still few and far between. There are plenty of daddy-bloggers squawking in the blogosphere about Huggies, Oscar Mayer, Philips Norelco and any number of consumer product companies who have stumbled when it comes to respecting the modern role of fathers. Dads are used as the poster-child of the unskilled parent, as bumbling comic relief, or as an unsuspecting target in a cheap marketing play. Or, as in the case with P&G, dads are simply ignored in the successful family unit. 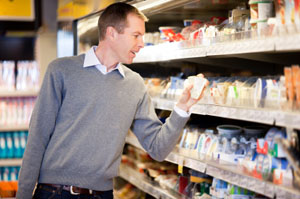 This has dad advocates upset. (Can we call ourselves dad-vocates?) Companies portraying fathers  as being a lesser parent should know that those of us trying to change the perception will fire up the bandwagon and storm into town.

Let’s be clear about something, though. Getting upset with companies and advertisers who simply don’t target dads isn’t going to accomplish anything. The goal of all advertising is to influence consumers, period. Companies are not responsible for solving society’s issues; they are responsible to their shareholders.

So when a company like P&G chooses to celebrate moms with their Thanks Mom Olympic campaign, dads aren’t doing themselves any favours being upset. It looks petty, and it doesn’t change the facts. Companies know that mom is still a bigger influence on family purchases. Mom—in general—is still the major consumer.

Advertisers have one goal; to get you to choose their product. They try laughter, empathy, temptation and blunt force commands to draw attention from the people who make choices. They call it the target audience. Moms are the target, because moms respond.

And he told two friends.

If dads want this to change—to see more positive reflections of dad in consumer advertising— the change must start with us. Here are three things we need to do if we want companies to target dads as parents.

Do you notice a common theme? Talk.

Talk about product benefits and product problems with other dads and families. Share your experience and empathize with others. Ask for recommendations. That’s what moms do—they leverage the message. That’s why companies pay attention to them.

I know, it’s probably not gonna happen anytime soon. Companies know it, too, and that is why they don’t worry about marketing directly to dads. Not yet.

The Huggies campaign deserved our wrath. Dad’s inability to parent was the point of the message, and it was insulting. But if we hurl our criticisms onto every company and product that simply doesn’t target us as a consumer in a campaign, we diminish the value of the times our wrath really does matter.

This entry was posted in Marketing, Thinking Differently and tagged Advertising, marketing, Shopping. Bookmark the permalink.

1 Response to The future of Dad’vertising.